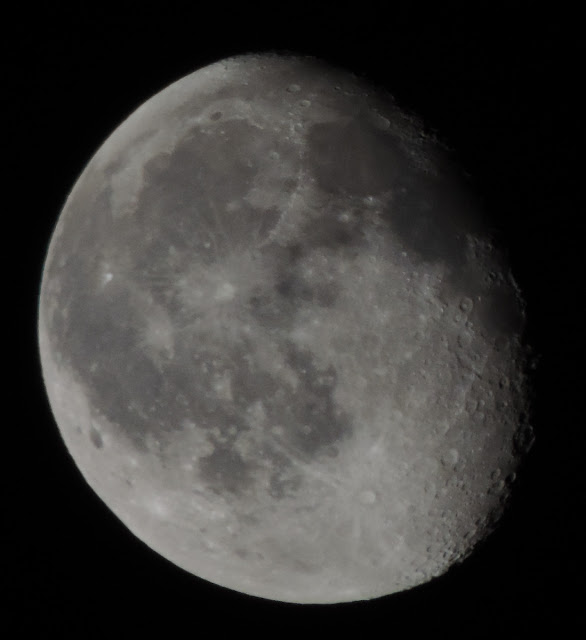 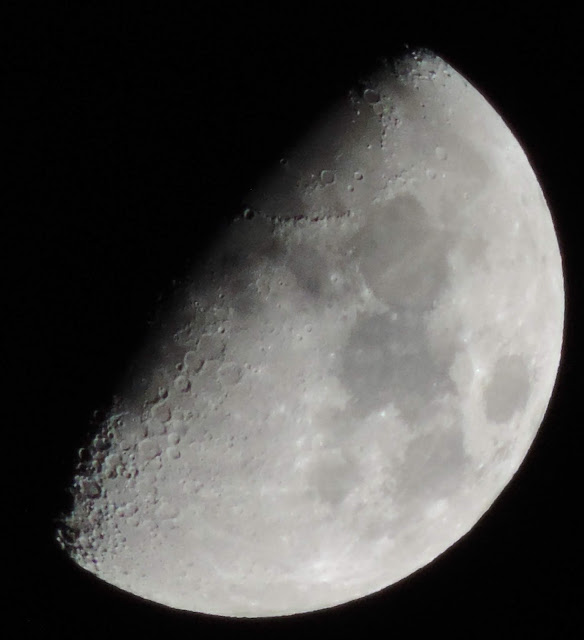 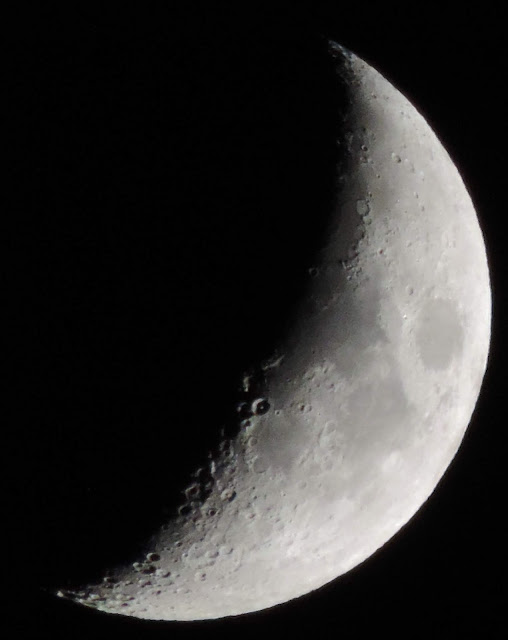 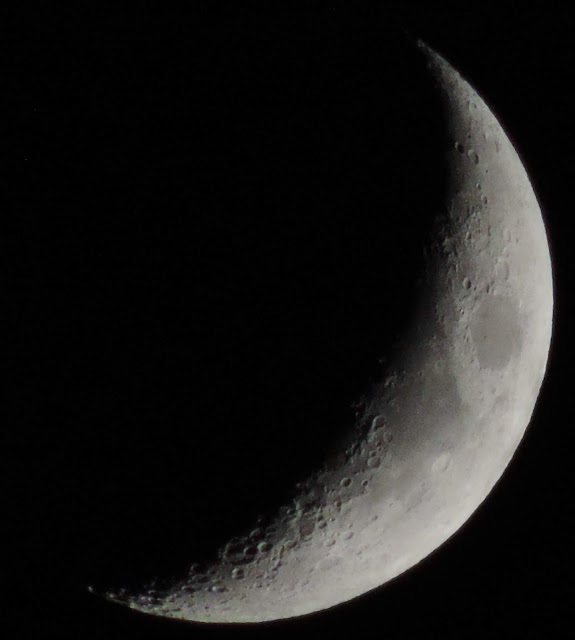 Photographed about 6:10 AM, almost directly overhead. Two different exposures to bring out features in the maria and the craters along the terminator. 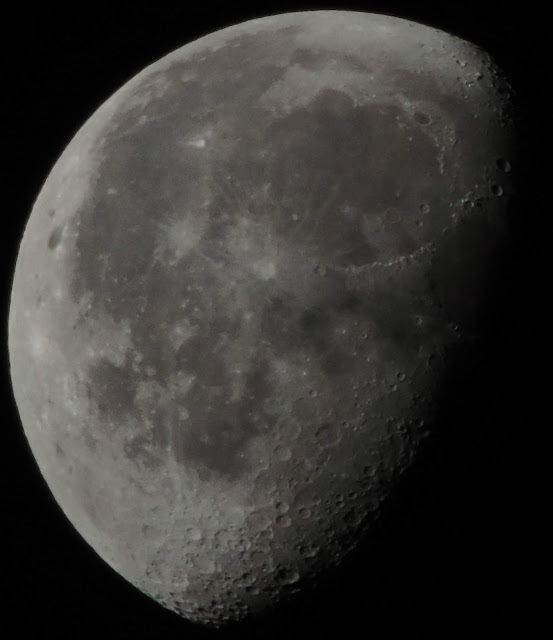 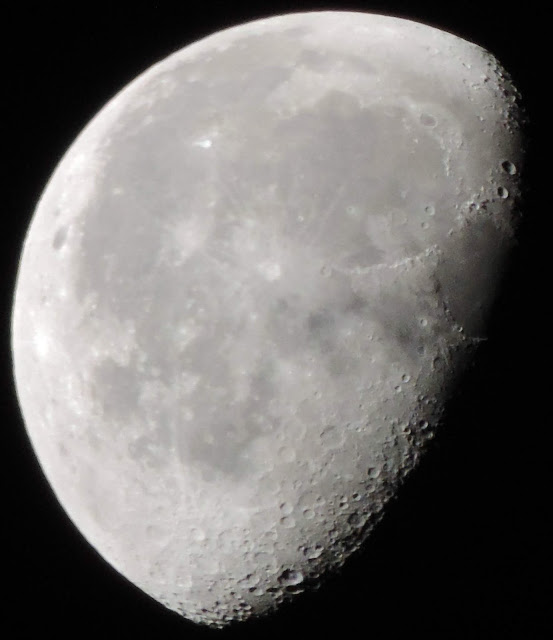 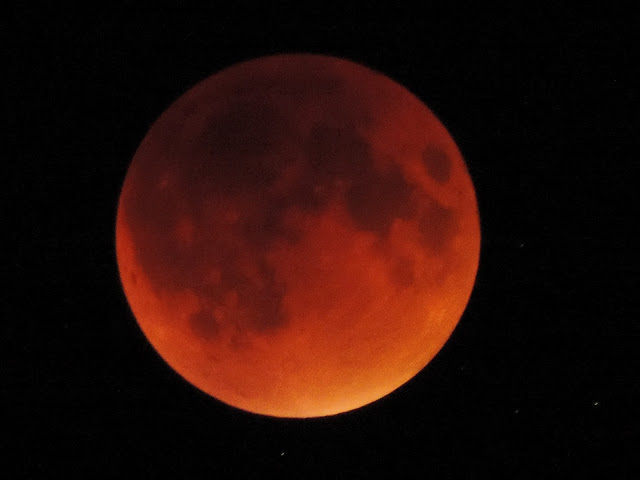 Three minutes past totality, but the exact minute of Full Moon. Note the nearby stars, something you would never see in the glare of an uneclipsed Full Moon. Image is slightly blurred because the shutter stayed open long enough to form an image - you can see this in the slight trailing of the stars.

For full coverage of the eclipse, go here.
Posted by D.B. Echo at 9:52 PM No comments:

Sequence of photos taken at roughly the same time each night between September 15 and September 20, 2015. The Moon was technically visible on September 14, as a super-thin 1% illuminated crescent, but was obscured by clouds. 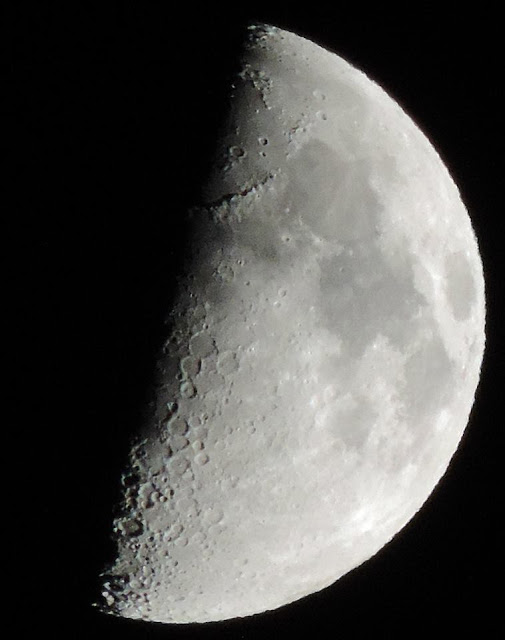 I've had my new camera for over a year now and still don't know how to use most of the features on the darned thing. Today I was inspired to try something new - play with the exposure control. One of the problems with photographing the Moon is that it's so bright -  even at its crescent phases, the brightness washes out a lot of detail. I've been getting around that by using a high shutter speed feature, which takes a burst of images of very short exposure time at a much lower resolution than normal. I wondered if, by using the exposure control I could get high-resolution images that also had more detail than my usual images.

My first attempt was taken at 8:06 PM, shortly after sunset. The sky was still fairly bright. I cranked the exposure control all the way down to -2.0, and did some processing to the resulting image - brightness and contrast adjustments and unsharp masking. I was very happy with the result.
I wanted to see what would happen when the sky was fully dark, so I took another photo at 9:26 PM. With this one I only applied unsharp masking; any attempts to adjust brightness or contrast resulted in undesirable results. The processed image has less contrast in the maria, but shows more detail along the terminator.

I'm glad that I tried this trick, and look forward to testing its effectiveness at other phases. Maybe I should go through the whole manual sometime...

Email ThisBlogThis!Share to TwitterShare to FacebookShare to Pinterest
Labels: Technical notes, Waxing gibbous
Older Posts Home
Subscribe to: Posts (Atom)
"Because we don't know when we will die, we get to think of life as an inexhaustible well. Yet everything happens only a certain number of times, and a very small number really. How many more times will you remember a certain afternoon of your childhood, some afternoon that is so deeply a part of your being that you can't even conceive of your life without it? Perhaps four or five times more, perhaps not even that. How many more times will you watch the full moon rise? Perhaps twenty. And yet it all seems limitless."
- Paul Bowles, The Sheltering Sky